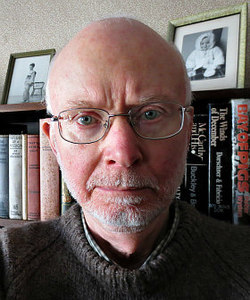 Alan Ireland was born in Birmingham, England, in 1940, and grew up in rural Warwickshire. Between 1962 and 1972, he lived in the Kanto region of Japan and worked as an editor at The Japan Times. Since 1972, he has lived in Palmerston North, New Zealand. He started writing poems while still at school, and has been widely published in literary journals. His other interests include landscape gardening, Islamic culture and yoga. (Blurb from my forthcoming book, ‘Micro Poems’.)
Recent Work
Kabul
Alan Ireland
171 views
All decisions are made / at a desk in another country. / They pass through / ‘in’ and ‘out’ trays, / collecting signatures along the way. /…
Kappa
Alan Ireland
138 views
Crushed by his carapace, / he slumps on a sheaf / of freshly cut bamboo, // dreaming of swamps, / the ideographs / of webbed feet. // His rounded…
Aokigahara
Alan Ireland
284 views
‘I’m thinking positive thoughts,’ / says the voice from an orange tent / in Suicide Forest. // Since he hanged his alter ego in effigy, / Mr T....
Cut-Price Poetry
Alan Ireland
1,145 views
Why am I drawn / to this scowling girl / selling her poems / in a Shinjuku underpass? // Every Tuesday she is here, / next to a Nikon ad, /…
Genseric Gets Literacy
Alan Ireland
123 views
And leaves a trail / of looted words. / Some play dead, / eschewing discourse. / Some seek refuge in / protective ambiguity. / Yet others…
Coup d’État
Alan Ireland
195 views
On the floor, / Big Daddy’s swagger stick / points an accusing finger / at the crumpled long johns. / In the perfumed bed, / his woman sits up, /…
Cellphone Tower
Alan Ireland
1,444 views
A lone magpie / auditions for / tomorrow’s ringtone, / lifts the lid of his beak / and lets slip / a fusillade of squawks, / shuffles his feathers…
Subscribed by Alan Ireland
His Name Might Be Adam
Annmarie Lockhart
343 views
We watch him fall because that is all / we can do: Bear witness to an action / that is unbearable. / / He hasn’t been identified; all these / …
Stay High
Becca Yenser
174 views
I meet a man in my backyard at dusk / He wears a trench coat like a husk / No one would ever believe my luck! // / Masked, headless, hopeful /…
Ten (Three Variations)
Becca Yenser
1,079 views
The yellow-striped garden spider busy wrapping bees. / A used condom half buried in the corn plot. / The man on the roof unfurls his tape measure....
Bright Bird
Becca Yenser
185 views
In the afternoons / I lie on my back / on the hot pavement and / watch the tomatoes die. // They die red with holes of pink, / they die with…
Comments (0)
© Ink Node, 2022 | Contact | About