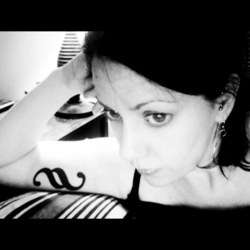 Amy Woolard is a writer and legal aid attorney working on economic & racial equity/justice policy and legislation in Virginia. Her forthcoming debut poetry collection, NECK OF THE WOODS, received the 2018 Alice James Award from Alice James Books. Her poems have appeared in The New Yorker, The Paris Review, Boston Review, Ploughshares, Fence, Gulf Coast, & Virginia Quarterly Review, & elsewhere, while her essays and reporting have appeared in Slate, The Guardian, Pacific Standard, and The Rumpus, as well as Virginia Quarterly Review, which awarded her the Staige D. Blackford Prize for Nonfiction in 2016. She has received fellowships from the National Endowment for the Arts, the Vermont Studio Center, & the Breadloaf Writers’ Conference. She lives in Charlottesville, Virginia. You can also find her at amywoolard.me, and on Twitter as @awoo_.

Recent Work
IN GROUND WE TRUST
Amy Woolard
450 views
I could be someone who splits her time. // Gospel of Low-grade Fever. Gospel of You Haven’t Touched / Your Drink. I will lie down with you but we…
WE’VE BEEN GONE SUCH A LONG TIME &…
Amy Woolard
478 views
We ask where are we & then we are / In a quandary. We feel our way / Around—the room, it’s dark with surprise— / We enter & we light it. Slick /…
THE HOUSEWARMING
Amy Woolard
461 views
It started before the first guests began arriving, before the three hour tapers began melting their last hour, before the chocolates & gin, before…
THE WALLFLOWER
Amy Woolard
414 views
All morning the hornet banging against the glass. / Some kind of shelves where should have been a door. / Rumors of the celebrity returning to…
STRAW MAN
Amy Woolard
479 views
Want a little smoke in the alley. Want a little kiss in the / Cornfield. Am parched, papery as an old hive. Open / Your arms wide for me now, love;…
Subscribed by Amy Woolard
The News
Dora Malech
2,046 views
late December, 2016 // Now’s news begins with babies on the way. Just one’s inside me, but another’s ascending to the throne our nation prides…
Dancer I
Lea Marshall
155 views
The most common case of an event horizon is that surrounding a black hole. Light emitted from beyond the horizon can never reach the outside…
Social Distancing
Noah Eli Gordon
708 views
I’ll quell the impulse to pick / Those bright purple flowers / If you quell the impulse too / In this way we both experience / Impulsiveness…
Last Acts, When You Know
Lea Marshall
4,230 views
stop counting / fill the car with dirt / make way / say no / cut the handles of plastic bags / finally kiss / plant bulbs / take off the dog’s…
Comments (0)
© Ink Node, 2022 | Contact | About