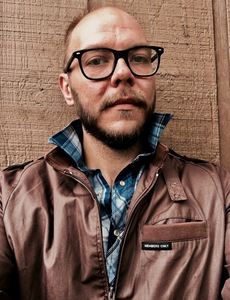 Christian Anton Gerard is the author of Holdfast (C&R Press, 2017) and Wilmot Here, Collect For Stella (WordTech, 2014). He’s received Pushcart Prize nominations, Bread Loaf Writers’ Conference scholarships, the Iron Horse Literary Review’s Discovered Voices Award, an Academy of American Poets Prize and a Best of the Net nomination. His work appears widely in the anthologies, Truth to Power: Writers Respond to the Rhetoric of Hate and Fear and Thrush: The First Two Years, and in magazines such as The Rumpus, Post Road, The Adroit Journal, Diode, Orion, and Smartish Pace. Gerard holds an MFA from Old Dominion University and a Ph.D. in English from the University of Tennessee. He is an Assistant Professor of English, Rhetoric and Writing at the University of Arkansas-Fort Smith. Find Christian on the web at www.christianantongerard.com
Recent Work
Wilmot’s Plane Leaves In Forty-Five…
Christian Anton Gerard
310 views
he can’t let her slip like petals on a wet, black bough / into the blue Volvo. He’s both young and old. / His holding on to her reveals…
She Wants A Picket Fence
Christian Anton Gerard
325 views
Wilmot’s spent the day like a baker, / fitting handmade picket-molds over / / slim cedar planks. Tracing lines, / jig-sawing her want into…
Wilmot’s First Time
Christian Anton Gerard
280 views
He’d saved extra lunch money, / chosen the heart shaped / / chocolate assortment, / and written the Angie-please- / check-yes-or-no love…
Wilmot Here, Collect For Stella; Or What…
Christian Anton Gerard
251 views
When sperm hits egg— us collapsed on a kitchen table. The building’s elevator where we met; our dinner I couldn’t afford. In a different…
When Billie Sings “Strange Fruit”
Christian Anton Gerard
270 views
Wilmot hears the muted trumpet behind her— / and weeps. A child’s tongue babbling before / bebop’s clarity in coming years, water…
Wilmot Here, Collect For Stella; Or If I…
Christian Anton Gerard
226 views
and you lived somewhere else, maybe in the forest, maybe not, no difference, just somewhere else, with a different language, and you found me in my…
Do You Have Anything Of His?
Christian Anton Gerard
205 views
I have his bald spot, Wilmot said, / proof he was alive. Also means / / he had to fight the cold. Maybe he asked / for a knitted hat or a coal…
Gramps Stayed Drunk On Jazz,
Christian Anton Gerard
232 views
Wilmot told her, Paul Whiteman mostly. / Radio went further than his dollar. / / Gramps was built from gristle and / both Beiderbeckes were a…
I THINK MY BODY IS POLYTHEISTIC, STELLA…
Christian Anton Gerard
219 views
because I keep dreaming I’m bleeding and / / the sacrifice is twofold, at least it must be because / right before I wake up / / I’m covered…
Subscribed by Christian Anton Gerard
Ink Node, 2009–2021
Brian Christian
432 views
Ink Node was conceived in Seattle in 2008 by Brian Christian and Evan Nagle, who imagined a different model for what a literary publication could…
The News
Dora Malech
2,046 views
late December, 2016 // Now’s news begins with babies on the way. Just one’s inside me, but another’s ascending to the throne our nation prides…
HARVEST PICTURE
Josh Kalscheur
381 views
The first woman I had sex with lived in a town that was barely alive and she took me onceto this hill on the outskirts, this hill that was…
Lou Reed’s 0-bituary: The Prequel
Jesse Damiani
582 views
November 8, 2013 4:48 pm Hey, brother! Goddamn, it’s been a minute. Good to hear from you, and seriously, thanks for reading my stuff. If I’m…
Comments
© Ink Node, 2022 | Contact | About