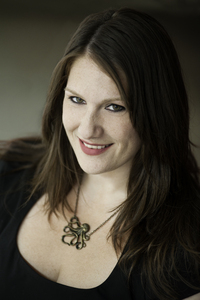 Jessica Piazza has seen some things. Terrible, terrible things. She’s the author of Interrobang (Red Hen Press), This is not a sky (Black Lawrence Press) and Obliterations (co-written with Heather Aimee O’Neill and forthcoming from Red Hen Press in 2015.) She holds a PhD in Creative Writing and English Literature from the University of Southern California and is published in Agni, Indiana Review, Mid-American Review, Rattle, No Tell Motel, 32 Poems, Forklift, Ohio, National Poetry Review, Pebble Lake Review, Anti-, Coconut, 42 Opus and some other places. She was a co-founder of Bat City Review and Gold Line Press, and a screener for the National Poetry Series. Sometimes, she blogs for really cool folks like Best American Poetry and Barrelhouse. Mostly, though, she hangs out with her dog Special and her husband Artur, teaches undergraduates how to dominate on the page and off, volunteers with little kids who–at ten-years-old–are somehow smarter than she is, reads good books and watches bad television. (Awful television, actually. Don’t judge.) Online, she lives at www.jessicapiazza.com. You can contact her at jpiazza (at) usc (dot) edu, on Twitter at @JessWins or on Tumblr at www.tumblr.com/blog/jessicapiazzapoet.
Subscribed by Jessica Piazza
Sally
Dena Rash Guzman
(0)
204 views
yes the heart will stop beating / maybe it’s best to be a star / shining long after its own death / named and noted—light studied / yes the…
California Eclogue No. 1
Jess Burnquist
(0)
208 views
Rounding the bend on Los Virgenes, / it happens every time. The canyon turns ocean / and I begin to cry. Salt-water heart, still so dry / from all…
Trash Can
Dena Rash Guzman
(1)
311 views
I’m mean and lean, // sullen cream cheese / cake on the counter. I baked. . I’m hot. I’m sweet. / I’m the wrong thing to do. That doesn’t stop you....
To Be Healed
Dena Rash Guzman
(1)
5,168 views
sometimes, under the rain is light / no common cloud can defeat / // we drink beer with the old boys / while deer shift gears / // in the…
Comments
Commenting has been disabled for this user.
© Ink Node, 2021 | Contact | About