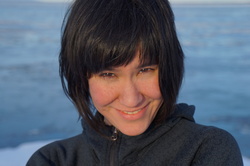 Joan Kane is Inupiaq with family from King Island and Mary's Igloo, Alaska. She earned her bachelor's degree from Harvard College and her M.F.A. from Columbia University. Kane's awards include a 2007 individual artist award from the Rasmuson Foundation, a 2009 Connie Boochever Fellowship from the Alaska State Council on the Arts, a National Native Creative Development Program grant, and a Whiting Writers' Award for her first book, The Cormorant Hunter's Wife. She received the 2012 Donald Hall Prize for her second book, Hyperboreal. She is recipient of the 2013 Native Arts and Cultures Foundation Literature Fellowship, the 2013 Creative Vision Award from United States Artists, and will be the 2014 Indigenous Writer in Residence at the School for Advanced Research and faculty for the MFA program at the Institute of American Indian Arts. Along with her husband and sons, she lives in Anchorage, Alaska.
Recent Work
Update on Joan
joan naviyuk kane
1,457 views
Joan is beset by the recurrent burial of women / in grounds profane and consecrated. / / Among her own people she is called… / Among others…
Tapiqtaa?iik
joan naviyuk kane
358 views
In one corner of the kitchen, ski boots / cracked from cold, gaping: / You're hoarding something beneath that canvas canopy / she said as…
The Straits
joan naviyuk kane
591 views
Ledum more familiar than Labrador tea, / another misnomer for rhododendron / in matted growth beneath the most shallow / depth of snow on record…
The Mother of All
joan naviyuk kane
715 views
Skies above the thicket / set aflame north of here: / / rosy fingered fucking dawn, / a crowd of spawned-out salmon / / under black…
Apocrypha
joan naviyuk kane
283 views
Hell, Mary, all these knots / ought to grip the girls / from slipping down, / down toward the gloss / of water we never want / to reach. I…
Under Four Flags
joan naviyuk kane
829 views
I. / / A coastline / a transitional place / bears evidence of others dwelling: / / a house pit in the shape of a nest / another like a…
Headline News (Compiled from A History…
joan naviyuk kane
673 views
ESKIMOS HAVE VARIOUS THOUGHTS / ABOUT WOLVES. FATHER TOM SAYS / ESKIMO LIFE DISTORTED BY CHEECHAKOS. / / FOSTER WANTS TO KNOW WHO INTIMIDATED…
Creve Coeur
joan naviyuk kane
278 views
Star / stars, and all other eyes / dead coals no interval / between each finish, / / the three, the lost. / / It is not my heart / …
Song 3
joan naviyuk kane
268 views
It is said that far beyond Imuruk Basin / huge birds hunt whales on the open ocean. / / Once shoved downslope by downbeat gusts / a man alone…
Late Successional
joan naviyuk kane
1,566 views
You ask / / to lead me to me / to lead you next / / to colors all wet: / bark saturated brown, / brown-green / / where lichen scurries…
Subscribed by joan naviyuk kane
knitting deaths
Lindsey Baggette
213 views
the aberration / peacocks will march / ghazal on systems / knitting deathsmy son is of fear / a pussy willow stains her / encore: cops / knitting…
behold: invisible
Lindsey Baggette
781 views
In the crosswalk, / a schopenhauer / that died. / / It swims the air / and grass / / between mothers / and their hot dogs. / / …
Soraya
anis shivani
1,275 views
Normal 0 38. / Patch reef our morning paternoster landed / us on, like paupers excluded from pavane / among the patriots of…
Poems I’m going to write and submit to…
Lindsey Baggette
703 views
Poem that I spilled a soda on but can still kind of read / / Poem that isn’t just about porn but is porn / / Shall I compare thee to a…
Comments (0)
© Ink Node, 2022 | Contact | About