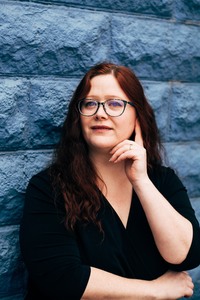 Ki Russell teaches writing, literature, and creative writing at Blue Mountain Community College in Pendleton, Oregon. Ars Omnia Press released Ki’s experimental novel-poetry hybrid called The Wolf at the Door in 2014. Ki also has a full-length poetry collection, The Antler Woman Responds from Paladin Contemporaries in 2014. Medulla Publishing released her poetry chapbook, How to Become Baba Yaga in 2011 She holds a Ph.D. in English literature (Creative Writing emphasis) from the University of Louisiana at Lafayette and an M.A. in English (Creative Writing emphasis) from the University of Missouri-Kansas City. Ki researches fairy tales and then butchers them for her own uses. She steals time from grading to wrestle with words, converse with the cat, dance with the dog, and paint. She believes people should laugh more.
Recent Work
Labyrinth
Ki Russell
(1)
135 views
Labyrinth / / * / The mermaid swimming / between mossy roots / in my backyard looks / me in the eye and winks. / I yank the curtains…
Gretel Grows
Ki Russell
(0)
163 views
Gretel Grows / / Ginger shavings slipped under my nails / mornings found me coughing wads of icing / I cut my palm and molasses beaded from…
Las Fotos del Éxtasis
Ki Russell
(1)
161 views
after Dali, with thanks to Mary Jo Bang // / The camera never lies so when / you see me spread out / in the corner, / my arm an…
Every Night is a Night of Bombs Somewhere
Ki Russell
(1)
243 views
Most dances are cries. Try to pin them in place. / Look away from ash—a boy and a girl / / loving that boy: screams and statues / …
Drowning in Pearls
Ki Russell
(1)
148 views
A strand of pearls bumps up my throat and the orbs drop // one by one from my lips. The last pearl catches in my teeth / / and I unhook the…
The Antlered Woman Responds
Ki Russell
(2)
179 views
The Antlered Woman Responds / After Mark Doty / / On misty-gray, not-dark, not-light days / I feel bone sprout from my temples. / I try to…
Subscribed by Ki Russell
California Eclogue No. 1
Jess Burnquist
(0)
242 views
Rounding the bend on Los Virgenes, / it happens every time. The canyon turns ocean / and I begin to cry. Salt-water heart, still so dry / from all…
The Feeling
Ayla-Monic
(0)
231 views
The feeling where your heart is being squeezed. / The feeling where your heart is pressing against the confines of your rib cage. / The feeling…
A Warm Fire, but Make it Feelings
Ayla-Monic
(0)
214 views
It snowed again today, / left the earth encrusted and my body shivering. / It’s cold in here, and I think about // bundling up, / heading out,…
Freeform Affidavit
Jess Burnquist
(0)
1,502 views
I will never regret the secrets I have kept. // Sometimes, though, they escape as a hiss. / // / The secrets I have kept belong to him as…
Comments (0)
© Ink Node, 2022 | Contact | About