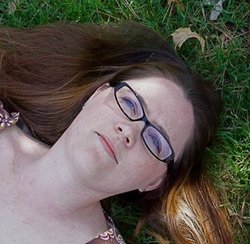 Phoebe Reeves earned her MFA at Sarah Lawrence College, and now teaches English at the University of Cincinnati’s Clermont College, in Southern Ohio. Her chapbook The Lobes and Petals of the Inanimate was published by Pecan Grove Press in 2009. Her poems have recently appeared in Drunken Boat, Third Coast, Sixfold, and Memorious. She also sings in a folk country band called No Consolation. You can find more of her work at www.phoebereeves.com
Recent Work
Visiting Home
Phoebe Reeves
153 views
Your house burned yesterday. Not / to the ground, not in consuming // / flames, as you might imagine— / it smoldered in the walls. A pine tree //…
Quercus velutina
Phoebe Reeves
136 views
I // // This tree is perfectly still above me like a / meditating saint, not slapping at the ants / crawling over her. Laughing at my vanity. /…
Coming Down the Mountain
Phoebe Reeves
174 views
// On the path lies the severed lower half of a mole. / Still silvery gray and silky fur, perfect small feet / and toes. Dropped by a hawk?…
Subscribed by Phoebe Reeves
From Poems for the Burning West
Dena Rash Guzman
222 views
“Like the Mom in The Road?” // fire woods fire brush fire towns / fire summer fire fall fire spring fire winter / suck breath / drought heat…
Sally
Dena Rash Guzman
292 views
yes the heart will stop beating / maybe it’s best to be a star / shining long after its own death / named and noted—light studied / yes the…
California Eclogue No. 1
Jess Burnquist
252 views
Rounding the bend on Los Virgenes, / it happens every time. The canyon turns ocean / and I begin to cry. Salt-water heart, still so dry / from all…
Trash Can
Dena Rash Guzman
406 views
I’m mean and lean, // sullen cream cheese / cake on the counter. I baked. . I’m hot. I’m sweet. / I’m the wrong thing to do. That doesn’t stop you....
Comments (0)
© Ink Node, 2022 | Contact | About