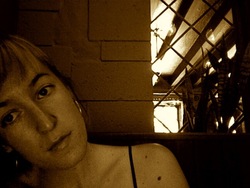 SARAH BARTLETT lives in Seattle, WA. Her debut poetry collection, Sometimes We Walk With Our Nails Is Out, was released in 2016 by Subito Press. She is the author of two chapbooks, My Only Living Relative, published by Phantom Books in 2015, and Freud Blah Blah Blah, published by Rye House Press in 2014. Recent work has appeared in PEN American, Poets.org, Boog City, Alice Blue, Powder Keg, and elsewhere.

sarah.l.bartlett@gmail.com
Recent Work
Cadence
Sarah Bartlett
1,854 views
// Instead of a street light / angling through your blinds / decorating sleep / I am a pale gleam  / on the sheets / my mouth the next verse…
Power Outage, My Only Living Relative
Sarah Bartlett
412 views
The arms of wind and rain / start their bear hug / It feels good to be held / by something / I watch the block disappear / I think of calling…
Bite
Sarah Bartlett
768 views
I see you there / so proud of your hole / in the wall / Remedial animal smell / the body’s red trail / a tantalizing prick / a gathering / …
One More Time
Sarah Bartlett
627 views
Should I take it personally / when you fall asleep while I’m talking / I tail you into dreams / / Dirty minds dirty nails / / I want to…
New Faith
Sarah Bartlett
634 views
Money is the only currency, / which is redundant. / Your gun is pressing against / my leg. This is a familiar itemization. / Wallstreet is…
from Freud Blah Blah Blah
Sarah Bartlett
672 views
I will Evel Knievel you so hard until fish come out / your eyes the same color as bar fights. / Your tight pants aren’t tight enough for me. /…
Catalog of the Fallen (from…
Sarah Bartlett
751 views
1: Compatriot, Morning Star, beauty. / 2: One long sword. Sharpened. / 3: Lip balm. / 4: Cold cape of Heaven, an upside-down wick. / 5: Ghosts…
from Freud Blah Blah Blah
Sarah Bartlett
1,798 views
–for EKF / / Dear Crab: sorry about that time I accidentally / knocked your shell off your back like a firework. / Your tiny body a blast…
Hell (i)
Sarah Bartlett
589 views
Always lost and looking at a map while / driving your car in the rain. You think you / make the right turn but you never do. / It’s one…
(X sits through hours of PowerPoint…
Sarah Bartlett
1,056 views
I put my coat on in the red room, arm by arm. Everyone hears the scrape of fabric against fabric and looks for the cause. Walls shrink away but the…
PsychoBox
Sarah Bartlett
1,000 views
/ I bought one / to perform in-depth / analysis in the guise / of a game—it’s not hard / to trick yourself. / The Rorschach blot / …
Subscribed by Sarah Bartlett
From Poems for the Burning West
Dena Rash Guzman
222 views
“Like the Mom in The Road?” // fire woods fire brush fire towns / fire summer fire fall fire spring fire winter / suck breath / drought heat…
Sally
Dena Rash Guzman
292 views
yes the heart will stop beating / maybe it’s best to be a star / shining long after its own death / named and noted—light studied / yes the…
Social Distancing
Noah Eli Gordon
708 views
I’ll quell the impulse to pick / Those bright purple flowers / If you quell the impulse too / In this way we both experience / Impulsiveness…
Trash Can
Dena Rash Guzman
406 views
I’m mean and lean, // sullen cream cheese / cake on the counter. I baked. . I’m hot. I’m sweet. / I’m the wrong thing to do. That doesn’t stop you....
Comments
© Ink Node, 2022 | Contact | About