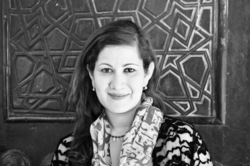 Shadab Zeest Hashmi’s work has appeared in Prairie Schooner, Poetry International, The Cortland Review, Vallum, Mudlark, Nimrod, Atlanta Review, Wasafiri, RHINO, World Literature Today, Spillway, The Adirondack Review, and POEM among other journals and anthologies worldwide. Her book Baker of Tarifa, based on the history of interfaith tolerance in Al Andalus (Muslim Spain) won the 2011 San Diego Book Award for poetry. Her poems have been nominated for the Pushcart Prize multiple times, and have been translated into Spanish, Turkish, and Urdu. “Ghazal Cosmopolitan” (Jacar Press) and “Comb” (Sable Press) are her latest books of essays and poems.
Recent Work
Dear Partitioned Dead
Shadab Z. Hashmi
(0)
92 views
// / I write to you of folding, tucking, burying side by side. The silk you worried the centuries into being, has arrived; bolts of it. But when…
Plague Prayers
Shadab Z. Hashmi
(0)
375 views
// O coniferous center / We plead, we whisper into your ever-pardoning ear / / Here, a hymn radiating / from a diaphragm of solid gold / /…
Silk Road Qasida
Shadab Z. Hashmi
(0)
729 views
Qasida of Cat Dreaming the Forbidden Mountain / / Daybreak, a mist-filled coin purse / from the Caucasus / Or koh e qaaf— mountain named after…
The End of the War
Shadab Z. Hashmi
(0)
488 views
/ I entered the city gates in a blind-fold / led by nothing but the summer drift / of fairy-roses / the secret musk of books / / How the…
Qasida of Half-Widows
Shadab Z. Hashmi
(0)
484 views
Qasida of the Teahouse by the Lake / / Zephyr’s saffron-sigh hanging in window / closed to news of Kashmir, window unlock- / ing almond- and…
Tongue
Shadab Z. Hashmi
(0)
5,452 views
The tongue in the Dictionary // does all the defining / (It will never / be tried / at the Hague) / / is a translucence / milked from a…
A Prince Makes his Choice
Shadab Z. Hashmi
(0)
119 views
// / I walked past the walrus ivory / chessmen / and the deer bone / / My tutors / sat complaining about the hour / / but none of the ladies…
A Game of Six, Deuce and Ace
Shadab Z. Hashmi
(2)
2,659 views
// / It’s the old / quarrel between faith and reason / / One in a faded pomegranate / gown and the other / / more dapper / wearing a slate…
See All >>
Comments (0)
© Ink Node, 2022 | Contact | About