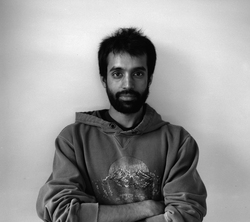 Shayok Misha Chowdhury is a queer Bengali poet, playwright, theater director, and vocalist. Born on the coast of southern India, he developed a taste for sour rice cakes and the seaside before moving to old-colony Massachusetts, where, in a high school theater rehearsal, he received his mantra, “story comes first”, from an unlikely medicine man with a galaxy of Harley tattoos. He has been living his responsibility to story ever since. A Fulbright and Kundiman Fellow, Misha’s poems have appeared in Hayden’s Ferry Review, The Portland Review, Lantern Review, Asian American Literary Review, and elsewhere. Co-founder of The Lonely Painter Project, he creates original, interdisciplinary works for the stage.
Recent Work
Biodiversity
Shayok Misha Chowdhury
648 views
He secrets a single riceseed into my cupped palm. / / It is blood-dark / and sits in the crease I’ve always imagined / to be the head of an…
Subscribed by Shayok Misha Chowdhury
Valentine’s Day
Jeremy Bass
830 views
This Sunday evening at 7:30pm, Mike O’Malley / Will drive his twenty-foot cherry-red monster truck / Over the blue discarded shells of 1980s…
East River
Jeremy Bass
748 views
If you stand on the shore of the East River, under the broad berth of the FDR, / you can just make out, in broken neon on the river’s surface, /…
Photograph of a Boy and a Dead Dog
Matthew Olzmann
14,103 views
Difficult to say how the boy feels, standing / in the road, the dead at his feet, his face / plain as a glass of milk. It could be his dog. / It…
Comments (0)
© Ink Node, 2022 | Contact | About