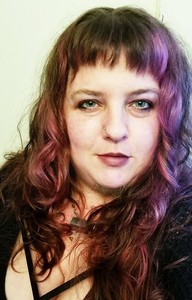 Sossity Chiricuzio is a queer femme outlaw poet, a working class crip storyteller. What her friends parents often referred to as a bad influence, and possibly still do.

A 2015 Lambda Fellow, she writes as activism, connection, and survival. She recently completed the hybrid memoir Honey & Vinegar: Recipe for an Outlaw, and is half of the performance duo Sparkle & truth. Her work has appeared in a variety of publications including Argot, Gertrude, Adrienne, Crab Fat, great weather for MEDIA, Lunch Ticket, Porkbelly Press, Rogue Agent, NANO fiction, Unchaste, and Atlas and Alice, as well as anthologies like Glitter & Grit: Queer Performance from the Heels on Wheels Femme Galaxy (Lambda Literary Award 2016) and Remedy: Queer And Trans Voices On Health And Health Care (Lambda Literary Award 2017), Best Lesbian Erotica 20th Anniversary Edition, and Not My President.

She is available for workshops, individual instruction, interviews, and collaborative literary projects - for more info: sossitywrites.com.

Recent Work
When politics are thicker than blood
Sossity Chiricuzio
(0)
22 views
I went to my father with my heart in my hands. Told him how terrified I was. Reminded him of the beautiful black and brown…
Subscribed by Sossity Chiricuzio
Sally
Dena Rash Guzman
(0)
158 views
yes the heart will stop beating / maybe it’s best to be a star / shining long after its own death / named and noted—light studied / yes the…
Trash Can
Dena Rash Guzman
(1)
262 views
I’m mean and lean, // sullen cream cheese / cake on the counter. I baked. . I’m hot. I’m sweet. / I’m the wrong thing to do. That doesn’t stop you....
To Be Healed
Dena Rash Guzman
(1)
4,030 views
sometimes, under the rain is light / no common cloud can defeat / // we drink beer with the old boys / while deer shift gears / // in the…
space pours wisdom into my brassiere
Dena Rash Guzman
(2)
225 views
Space pours wisdom into my brassiere / // into flesh, ears, onto my face, that pretty thing. / I’m full of space. I don’t live in time. / I…
Comments (0)
© Ink Node, 2020 | Contact | About