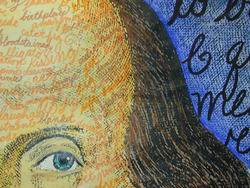 W. Scott Howard teaches poetics and poetry in the Department of English & Literary Arts at the University of Denver. He received his Ph.D. in English and Critical Theory from the University of Washington, Seattle, where he was a member of the Subtext Collective. Scott worked at Powell’s Books (1990-93) where he co-managed (with Vanessa Renwick) the Small Press & Journals section, the dewclaw reading series, the prism interdisciplinary discussion series, and also managed the Critical Theory section. His interviews in PLAZM magazine (1993-97) are noted in the documentary film, Helvetica (2007). He is the founding editor of Reconfigurations: A Journal for Poetics & Poetry / Literature & Culture. Scott’s poems may be found in afterimage online, BlazeVOX, Burnside Reader, Denver Poetry Map, Diagram, Eccolinguistics, Ekleksographia, E.Ratio, Many Mountains Moving, Visible Binary, word for / word, and Talisman. His collections of poetry include the e-book, ROPES (with images by Ginger Knowlton) from Delete Press, 2014; and SPINNAKERS (The Lune, 2016). His work has received support from the Modern Language Association, the Pew Charitable Trusts, the National Endowment for the Humanities, and the Beinecke Library, Yale University. Scott lives in Englewood, CO and commutes year-round by bicycle. He may be found following what crow dost.
Comments
© Ink Node, 2022 | Contact | About